Time flies! I guess when I’ve got no new books coming out I sort of lose track of my website. In fact, until recently it looked like I wouldn’t have ANY books coming out this year for the first time since 2004. But at the last minute I got asked to do another Rosie the cow story for DairyNZ. So that was exciting. The book will be released in October, I think. 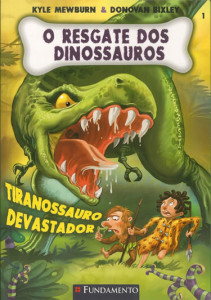 In the meantime I’ve been hard at work on my new Junior Fiction series called Dragon Knight. It’s all a bit TOP SECRET at the moment, because the first episode isn’t coming out until March next year, so I can’t give away too many details yet. But stay tuned! Hopefully all the Dinosaur Rescue fans will enjoy my new series as well.

Speaking of Dinosaur Rescue, today I received my copies of it in Brazilian! Very exciting. It’s now been published in 25 countries, including Israel, Slovenia and most of Asia. Still not available in the US or UK, I’m afraid. Weird.

In other exciting news I was recently in Wellington to talk to the kids who made enormous sculptures based on my stories. Talk about impressive! What a great job they all did. Click on this link to view some photos.

More exciting news! I’m off to the Leipzig Book Fair in March to kick-off NZ’s role as Country of Honour at the Frankfurt Book Fair later this year. There’s nine writers going altogether, but I’m the only children’s writer. I feel very honouored and priveleged to be chosen. I can’t wait!!

So have you heard about the BLOOM festival yet? Me and a whole bunch of talented people from writers to circus performers to musicians and rugby stars will be in Matakana for the weekend of January 20-22. Should be a fabulous weekend! I’ll be telling a few stories,reading some books and running a workshop or two. What a great way (and a fantastic place) to spend a long, hot (hopefully) summer’s day? If you want to know more, look at the festival’s Facebook page – Bloom Festival. See you there!

WOW! My new-look website is finally up and running. What do you think? It was designed by Year 13 student Charlotte Boyce as part of a web design project at Columba College in Dunedin. I think it looks pretty cool. So a round of rapturous applause for Charlotte!! If you have any feedback or thoughts, let me know and you could win your choice of my titles. Any title … as long as I’ve still got a copy lying around. So that’s my excuse for the total absence of new between May and now.

A lot has happened in the meantime, I must say. It’s been a busy year.

For example  – I’ve had three new picture books, a junior novel and the first four episodes of my exciting new Dinosaur Rescue series released. I also had two launches – one at the Dunedin College of Education for Hester and Lester and DO NOT PUSH,  and another local launch at the Alexandra library for Moon Cow.

I’ve also just finished an on-line picture book project for Telecom, with the amazingly talented Donovan Bixley doing fabulous illustrations. The book, titled – The story of Bo and the circus that wasn’t – will be released in February, with all proceeds going to the Telecom Foundation.